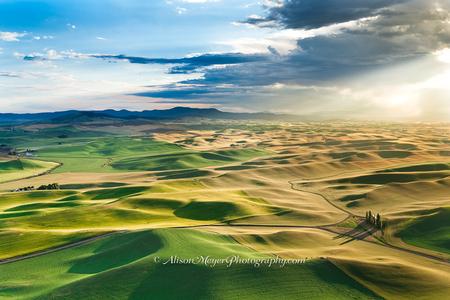 One July morning, I had a helicopter flight scheduled right after sunrise to fly over the Palouse around the Moscow-Pullman area. An intense thunder storm had passed through right before dawn and as the sun rose, the storm was passing to the east, but the winds were still strong and the streets of Clarkston were deeply puddled as I drove to the heliport on the bank of the Snake River. Thankfully, my pilot was experienced with flying in severe conditions and we agreed to fly. I was pretty thrilled and a little nervous-- strapped in my seat of the 2-seater chopper, my window removed so I could photograph easily-- as he corrected the flight relative to the wind speed and direction, flying at an angle up the grade and over the hills. The departing storm provided dramatic clouds and colorful beams of light streaming over the fields below, making it all more than worth it! This shot was taken just southeast of Moscow, Idaho, looking north toward Moscow Mountain, which is the dark ridge on the horizon in this photo.

The AlisonMeyerPhotography.com watermark that appears on this website's online photo samples will not appear on the printed photographs.


Scroll through the entire "Purchase This Item" menu to see all of the available sizes and print options for this photo.